Child abuse comes in many forms: physical abuse, emotional abuse, medical abuse, sexual abuse, and neglect. When we’re suffering from depression and dealing with the inability to take care of ourselves, we are at risk of neglecting our children. This risk must be mitigated in order to prevent seriously harming our kids.

It’s all well and good to say so, but how does one prevent child abuse when they have depression? Here are 4 crucial tips to parenting with depression.

Self-care is that oxygen mask.

Self-care may seem like just another item on the to-do list. But it’s actually crucial for you to function. Self-care is taking responsibility for your physical and mental well-being. If you don’t perform some self-care on a daily basis, you’ll not only neglect yourself, you may start to neglect your kids as well because you’re burnt out.

Some people think self-care is limited to bubble baths and painting your nails. That’s not true. Taking your medications and attending therapy are forms of self-care. So is getting enough sleep, target=”_blank”>eating well, and drinking enough water. Spending time outside and with other people also falls under that umbrella.

If you put your oxygen mask on and practice self-care on a daily basis, then over time you’ll be in a much better position to care for your children. Avoid burn out. Prioritize self-care.

Tip #2: Seek Professional Help for You and Your Child

When you’re a parent suffering from depression, the bond with your child may suffer. You might neglect your duties at home and spend a lot of time in bed, ignoring your babies. This is frightening and confusing to a kid, who needs you to be a consistent presence in their lives.

Before the situation gets that bad, seek professional help. Find a therapist you can trust for yourself, and talk about your feelings with him or her.

But don’t forget to find a therapist for your child as well. He or she may need help understanding why your depression affects you the way it does. Your kid needs a trusted adult to be a comforting presence. A therapist can teach your whole family coping skills.

Tip #3: Communicate with Your Child

As I’ve said before, parental depression can cause unusual behaviors in you which are scary to your child. Nip that in the bud and communicate with him or her as much as possible about your depression.

Let your kid know that your mental illness, while not going away, is not his or her fault. Explain that you have a chemical imbalance in your brain, and you’re doing your best to cope with it. If you are taking medication, tell your child that you are taking steps to circumvent the depression and its effect on him or her.

Don’t be afraid to let your kid know how you’re feeling that day, be it tired, sad, or even and especially happy. Don’t make him or her responsible for your emotions, but do share them with your child.

Tip #4: Forgive Yourself for Mistakes

You cannot be the super parent every day of the week when dealing with depression. Setting too high of expectations for yourself and your children can be dangerous, because if you fail, it can trigger overwhelming feelings of despair.

Recognizing that you deserve forgiveness for mistakes, especially while suffering from depression, can be one of the hardest things you’ll do. But you must forgive yourself if you mess up, because you’re setting an example to your child to forgive you and others.

Know that “good enough” parenting is really good enough. Allow your kid some leeway when it comes to screen time. Offer them a cheese and celery and tomato plate instead of a full dinner, but only occasionally, when you really can’t cook. (For a post on 22 easy meals to make while depressed, click here.) And don’t cut back on your kid’s activities; get him or her out of the house as much as possible, so he or she can be around other people.

Parenting while suffering from depression is one of the hardest things you’ll ever do. Neglecting yourself comes easily; neglecting your children is just the next logical step. Don’t get there. Practice self-care, seek professional help for you and your child, communicate with him or her, and forgive yourself for your mistakes.

These practical tips will help you foster a more positive environment for you and your kid. Eventually, if you continue taking care of yourself, your depression will lift, and you’ll be able to say that you did a good job parenting while suffering depression.

I wish you well in your journey. 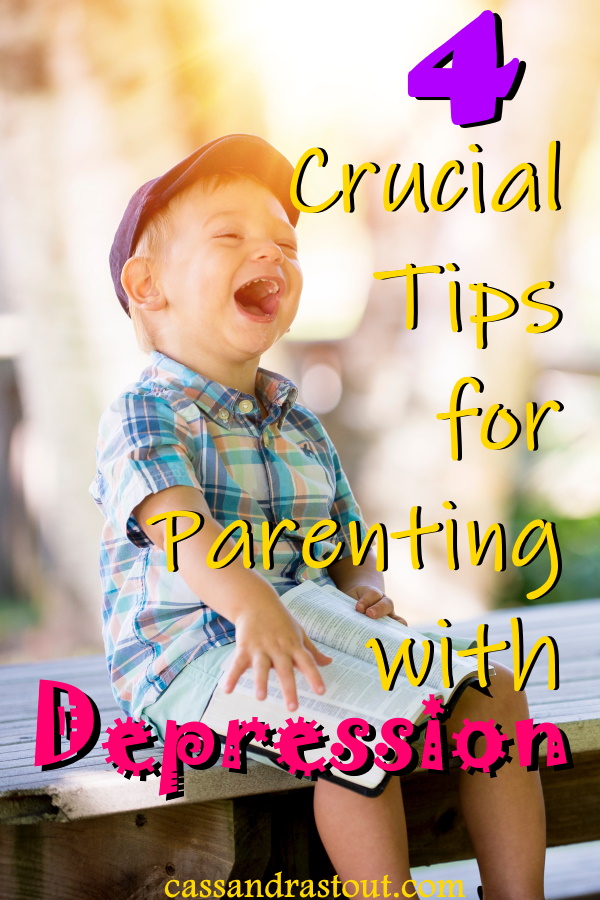 Bipolar disorder is a mood disorder that affects 2.6% of American adults–about 5.7 million people–according to the National Institute of Mental Health. The disease is characterized by mood episodes: “highs” called mania and “lows” known as depression.

Symptoms of Mania and Depression in Children and Adults: A Side-by-side Comparison

Check out the following chart to see a side-by-side comparison of symptoms of bipolar disorder in children and adults:

These symptoms are similar, but the way they manifest is different for children than adults. For example, during both manic and depressive phases, children are much more likely to be irritable and aggressive.

Pattern of the Disorder

The most striking difference between childhood-onset and adult-onset bipolar disorder is the patterns of the illness. Adults generally vacillate between defined episodes of mania and depression that last weeks or months. They can also have periods of wellness that last from months to years in between.

Kids are the opposite: they experience prolonged periods of rapid cycling, which means they bounce between mania and depression daily, if not multiple times per day. And there are no periods of respite in children with bipolar disorder; they are always suffering from a mood episode.

One study of pediatric bipolar patients examined children with bipolar disorder who suffered more than one hundred mood episodes over a short period of time. The manic periods were called “mini-manias.” According to the study, none of the patients under 9 years old endured a single mood episode lasting two weeks or more. Short, frequent episodes was the way the illness presented in the children.

Kids who end up with bipolar disorder were usually genetically predisposed to develop the disease. One of the many causes of bipolar disorder can be family history of the illness, though sometimes the disease can occur without any history present. But, in the case of children who develop the disorder, there are typically more family members with bipolar in their lives than those children without the disorder. The kids are also much more likely to have relatives–such as parents, aunts and uncles, and grandparents–on both sides with the disorder.

Pediatric bipolar disorder presents unique difficulties compared to the adult-onset form of the disease. Kids are still developing mentally and physically, so when they suffer from the rapid cycling moods of bipolar disorder, life can become very difficult. These children are establishing their identities, and enduring vacillating episodes of bipolar disorder makes that very hard.

Adults usually have their identities established, or at the very least, are set in their ways, so figuring themselves out is not as much of a struggle. Adults are also more emotionally mature than children, and can better handle shifts in mood.

Instead of the euphoric highs of mania typically experienced by adults, kids are much more likely to suffer chronic irritability, a state where they are grouchy all of the time. This is because children tend to suffer from mixed states, where they endure extreme episodes of mania and depression at the same time. Treating mixed states can be very difficult. Even lithium, the gold standard medication that is used to treat bipolar disorder, is often ineffective at handling mixed states. Lithium is able to treat both depression and mania in bipolar patients, but it’s totally ineffective at handling mixed states.

Adults can also suffer from mixed states, but children are much more likely to experience them.

When children with bipolar disorder grow up, their diseases are worse than people who suffer from an adult-onset version of the illness. The mood episodes are more intense in childhood. But early therapy and other interventions can help your child deal with their condition. The earlier a treatment team can intervene, the better.

Hello! Thanks for stopping by! Check out my blog, The Bipolar Parent, or my forthcoming memoir, Committed. And please contact me if you have any questions! If you are interested in finding out more about the Bipolar Parent blog, then please visit the Master Link List, which holds links to the relevant blog posts.