In 2015, the Washington Post conducted the first ongoing tally of officer-involved shooting deaths of the mentally ill. Nationwide, at least 25% of people who are shot and killed by police officers suffer from acute mental illness at the time of their death. People with untreated mental illness are 16 times more likely to be fatally shot during an encounter with police than people with their mental illnesses under control.

According to the Post’s 2018 tally, 1,165 civilians were fatally shot by police. Of those, more than 200 were confirmed to be mentally ill. Someone needs to be paying attention.

Unarguably, mental illness isn’t the only factor involved in fatal police encounters. Race is one that is often talked about. But the link of mental illness to police brutality doesn’t have the same publicity.

In 2015, the New York City Police Department responded to more than 400 mental health calls per day, more than 12,000 per month. But why do the police respond to mental health crises, and not EMTs? Historically and correctly, law enforcement has been paid to transport people suffering breakdowns to hospitals. And for many mental wards, police involvement is a requirement for involuntary admittance. In Washington state, for example, “under almost all circumstances police involvement is the primary factor in determining whether referral will result in commitment” (Carr, Durham, and Pierce 1984). This happens often enough that the state of Oklahoma’s mental health department includes a budget line item specifically for reimbursing police to transport patients.

The perception of people suffering mental illness as violent and dangerous is another reason police are called. Officers are the only people often perceived by the public to be able to deescalate mental health crises. According to the American Psychiatric Association, most people with mental illness are not violent, but using the law enforcement as a blunt instrument contributes to the stigma that they are. In fact, people with mental illness are more likely than others to be victims of a crime, not perpetuate them.

A Call to Action for Governments

The December 2015 report from The Treatment Advocacy Center, “Overlooked in the Undercounted: The Role of Mental Illness in Fatal Law Enforcement Encounters,” urges lawmakers to make sweeping changes to this broken system. The authors recommended that the lawmakers:

Since that study, there has been marginal progress. The 21st Century Cures Act, passed by Congress and signed into law by President Obama in December 2016, mandated that data on the role of mental illness in fatal police encounters be collected and reported. Soon after, the Bureau of Justice Statistics started using a new methodology in reporting arrest-related death statistics. Using the new methodology, the number of arrest-related deaths that were verified and reported to the Department of Justice doubled.

But the act is not as robust as it could be. According to the Post’s tally, police killed about two dozen more people in 2017 than in 2016, and even more in 2018. The numbers don’t lie; things have not improved much, despite more accurate reporting.

What Can I Do?

Progress is slow, and this may feel like an insurmountable problem. But there are things you can do to help. Contact your House representative and let them know that you are concerned about fatal police shootings. Read books like Breakdown: A Clinician’s Experience in a Broken System of Emergency Psychiatry, which describes why psychotic patients need involuntary commitments. Champion police body cameras and mandated government reporting of the role of mental illness in shootings. Advocate for mental health funding at all levels of government. If you are a police officer, rely on your crisis training to deescalate crises involving the mentally ill.

Fatal police shootings, especially of when they involve people suffering from mental illness, are not new or rare. Nor are they going away. But there are things you can do to help. We’ve got to stop this trend. With consistent pressure on our lawmakers and law enforcement, we can fix this. 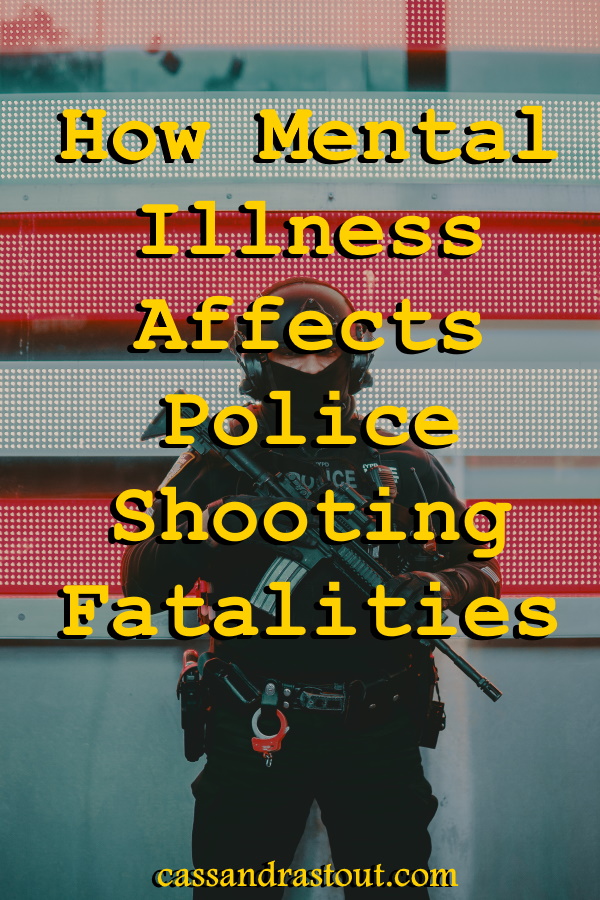 Mental illness is widely misunderstood by the general public. People who suffer from mental disorders can find that many myths surround their condition. These misconceptions contribute to stigma, making it more difficult to seek treatment and manage disorders. We’d like to dispel some of these fictions.

1. People Can Use Willpower to Recover

While there is no definite cure-all for mental illness, it definitely can’t be treated by willpower alone. People can’t just “snap out of it.” If only managing a condition were that easy! Conversely, treatment such as medication, psychotherapy, and Electroconvulsive therapy (ECT) actually works. Scientists are frequently discovering new advances in treatment, and with them, sufferers of mental illness can manage their disorders and lead healthy, productive lives.

Nope, this is bogus as well. People with mental disorders can and do contribute to the workplace and home. Most of the time, the mentally ill are excellent at “covering” for their illnesses, which basically means that they can successfully pretend that all is well. They can be so good at covering, friends and family don’t even recognize that the disordered are mentally ill.

No, no, no. The causes of mental illness are varied, including genetics, physiological changes, and environmental stressors. Neglect and unusual stress in the home tend to exacerbate underlying conditions which have biological causes. It’s not the parent’s fault that a child develops mental illnesses. Which leads us into our next point…

Children make up a great percentage of the mentally ill. More than half of all mental illnesses show up before a child turns fourteen, and three-quarters of them appear before the age of twenty-four. Even very young children can demonstrate symptoms of mental disorders.

Dead wrong. Suffers of mental illness make up a meager 3-5% of the incidences of violent acts in society. Hollywood has a terrible habit of stereotyping the mentally ill as violent, from Norman Bates in Psycho to Jim Carrey’s character in Me, Myself, and Irene. In fact, disordered people are ten times more likely to experience violence than the general population.

This is absolutely not the case. One in five adult Americans endure mental illnesses each year. Roughly six percent of the population suffers from a debilitating disorder. You’re not alone if you have a mental health problem.

7. Most Mentally Ill People are White

Actually, most mentally ill people are minorities. African Americans are the most at-risk group, vulnerable to mental disorders such as depression due to increased stress from economic disadvantages.

8. People Can Recover With Drugs Alone

Medications and ECT are only part of the equation. The rest is talk therapy, which most people prefer to use rather than drugs, and peer support groups. These latter strategies try to lessen the effect of environmental stressors, which can trigger or exacerbate underlying conditions.

These myths are damaging to the mentally ill. By educating yourself about mental disorders, and spreading the truth about them, you can help combat dangerous misconceptions which stigmatize sufferers of mental health issues.

Hello! Thanks for stopping by! Check out my blog, The Bipolar Parent, or my forthcoming memoir, Committed. And please contact me if you have any questions! If you are interested in finding out more about the Bipolar Parent blog, then please visit the Master Link List, which holds links to the relevant blog posts.